BER Cork Rating what is it

A Building Energy Rating (BER) is an indication of the energy performance of a home.
It covers energy use for space heating, water heating, ventilation and lighting calculated on the basis of standard occupancy.
A Building Energy Rating (BER) is similar to the energy label for a household electrical appliance like your fridge. The label has a scale of A-G. A-rated homes are the most energy efficient and will tend to have the lowest energy bills.
From the 1st of January 2009, a BER certificate became compulsory for all homes being sold or offered for rent. If you are buying or renting a house or apartment, you are entitled to a BER so ask the seller, landlord or agent for it.
A Building Energy Rating (BER) certificate is accompanied by an advisory report which will identify how you might improve the energy performance of your home.
A Building Energy Rating (BER) is also required, subject to transitional arrangements, where construction of a new home begins on or after 1st January 2007.
There are exemptions for certain categories of homes, for example, protected structures and certain temporary homes.
A new home (i.e that has never been sold or occupied) is exempt from the BER requirement if the planning application was submitted on or before the 31st December 2006 and if it was substantially completed by 30th June 2008. ‘Substantially completed’ means that the external walls have been erected.

Who needs a BER cert?
A seller must provide a BER to prospective buyers or tenants when a home is constructed, sold or rented under the following circumstances:
New homes where planning permission was applied for on or after the 1st of January 2007. A new dwelling (i.e. a dwelling that has never been sold or occupied) is exempt from the BER requirement if it had been the subject of a planning application submitted on or before 31 December 2006 and if it was substantially completed by 30 June 2008. “Substantially completed” means that the external walls have been erected.
All existing homes for sale or rent on or after the 1st of January 2009. An existing dwelling is a dwelling which has previously been sold and/or occupied.
All new homes (even when not for sale) must have a Building Energy Rating (BER) certificate (barring those defined as being exempt above) before they are occupied as detailed under S.I. 666 under http://www.environ.ie/en/Legislation/DevelopmentandHousing/BuildingStandards/
Building Energy Rating (BER) assessments performed on new dwellings will also help determine compliance to Part L of the Building Regulations.
There are exemptions for certain categories of buildings (Ref. S.I. No.666 of 2006).

How much does a Building Energy Rating (BER) cost?
There is no set fee for a BER and it is a matter for a BER Assessor to charge as they deem appropriate for the particular services offered. SEAI strongly recommend to all people wishing to commission a BER assessment to shop around for the best price and if possible to check references with other clients. Assessors are charged a levy of €25 to submit a BER assessment to the national BER database and this must be included in the price charged.
You should agree a fixed price inclusive of VAT for all the services the BER Assessor is providing. (Note that BER Assessors are required under the terms of registration to provide such a written quotation.)

What the Homeowner can expect from a Building Energy Rating (BER) assessment
Once you have selected your Assessor the Assessor will make an appointment to visit your home so that they can complete a BER assessment survey on it.
When the Assessor arrives at your home they will conduct a non intrusive survey. A Building Energy Rating (BER) assessment will typically take a couple of hours to complete (depending of course on the home size and complexity). The Assessor will need to have access to all the rooms in your home.
During the survey they will be measuring the area of the rooms, measuring the windows, the thickness of the walls, the levels of insulation, the heating system, the number of flues, the floor types and the wall types. The Building Energy Rating Assessor will typically collect 80 pieces of data which describe your home, which are then entered by the Assessor into the BER software tool in order to generate the BER.
How the Homeowner can prepare for the BER assessment
There are a number of items that would be helpful to the Assessor if the homeowner were able to provide the following:
A recent electricity bill so that the Assessor can note the Meter Point Reference Number (MPRN)
The date of construction of the dwelling
Details of any previously published BER for the dwelling on the national register
Any plans or specifications of the dwelling if they are available
Details of any upgrades that have been made to the dwelling e.g. insulation
The boiler model number or any documentation for the boiler
Making sure the Assessor has safe and unobstructed access to all areas of the dwelling
What happens after the Building Energy Rating survey?
A BER Cork Assessor will return to their office and input the survey findings into the BER assessment software called DEAP. There are approximately 80 data inputs that the Assessor must enter.
Once this is complete the Assessor will log on to the online SEAI National Administration System (NAS) and upload the DEAP file. This will generate the BER Certificate and the Advisory Report.
A BER Cork Assessor will then give the homeowner a copy of the BER Cert and the Advisory Report.
A BER Cork Assessor will be able to answer any queries you have relating to your dwellings BER cert.
SEAI maintain the register of BER certificates. To see your BER on the national register please go to https://ndber.seai.ie/pass/ber/search.aspx and enter either the BER number of MPRN number for your dwelling. 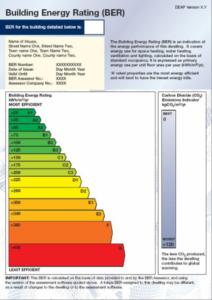